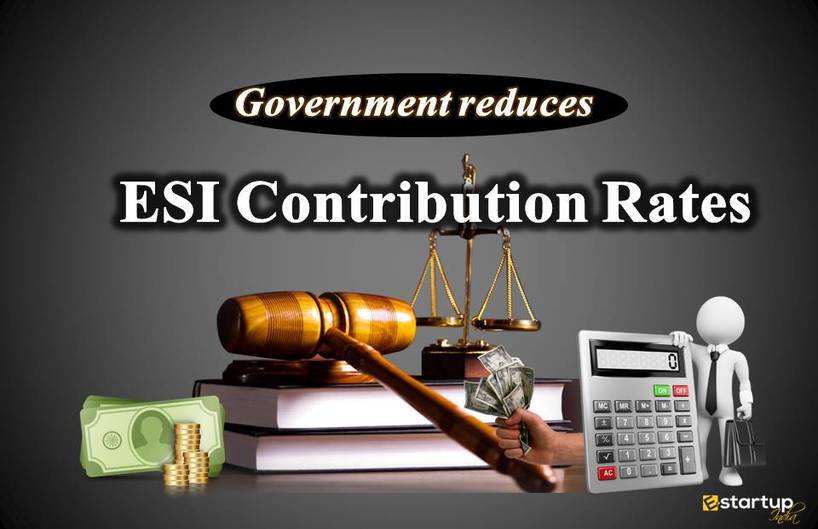 Employees' State Insurance or ESI is undoubtedly one of the most beneficial schemes run by the Central Government of India. The main aim of ESI is to cover all the financial risks of the employees of the organized sector. The most economical and preferable way for an average employee to cover social security risks is, to obtain an ESI registration.

In this regard, the Government of India had recently decided to reduce the ESI Contribution rates from 6.5% to 4%. Now, the Ministry of Labour & Employment has notified that the rates of ESI Contribution shall be reduced to 4%, out of which:

1. What revisions have been made to the ESI Contribution rates?

Government has recently reduced the rates of ESI Contribution of the employees as well as employees as follows:

2. Why has the government reduced the ESI Contribution rates?

The government has reduced the ESI Contribution rates with a view to providing substantial relief to the workers. Here are some reasons behind the government's decision:

3. How many times have ESI Contribution rates been changed?

4. What are the recent reforms under the ESI scheme?

The government has recently introduced certain key reforms in the ESI scheme, which are as follows-

5. How have these measures been beneficial?

The current efforts of Government have been fruitful and have resulted in a substantial rise in the number of employees having ESI Registration i.e. more persons having ESI cover. This has also led to a quantum increase in ESIC revenue. The figures have been given below-

No doubt, the most preferable way for an employee to cover all social security risks is to obtain an ESI registration.

In case you require any sort of assistance regarding the ESI registration feel free to contact us at 8881-069-069.

Now, you can download E-Startup Mobile App and Never miss the latest updates relating to your business.

Evidently, the provisions of the Employees’ State Insurance Act 1948, provide for financial assistance to workers. Such assistance is accessible to the workers of an organization having ESI registration, in case of certain health-related issues that the workers might face, such as-  An illness,  Maternity leaves,  Acute or chronic disablement,  Occupational in

Employees' State Insurance, also known as ESI is indeed one of the most noteworthy schemes run by the Central Government of India. Its objective is to cover all the risks of the employees who are employed in the organised sector. Today, the most economical and convenient way for an average employee to cover all social security risks is, to get an ESI registration. The government g

Very recently, the Ministry of Corporate Affairs has introduced a new form for company incorporation, i.e. the Form  INC-35, commonly known as e-Form AGILE. From 31st March 2019 onwards, all those companies that are intending to file the application for company formation in SPICe form, need to file this new e-form AGILE along with SPICe. They can opt for GST Registration, ESI Registration

Employees' State Insurance or ESI is undoubtedly one of the most beneficial schemes run by the Central Government of India. The main aim of ESI is to cover all the financial risks of the employees of the organized sector. The most economical and preferable way for an average employee to cover social security risks is, to obtain an ESI registration. The government gives variou

Undoubtedly, it’s the gala time for India Inc. as the government has recently announced the reduction in the Corporate Tax Rates for the Domestic Companies and the newly established companies in the manufacturing sector.  The government has taken this step so as to draw in fresh investment in the Indian manufacturing sector and to boost the 'Make in India' drive. The substant

Employees' State Insurance or ESI is indeed one of the most ideal schemes run by the Central Government of India for the employees. The key objective of ESI is to cover the financial as well as the security risks of the employees of the organized sector. The most economical and preferable way for an average employee to cover social security risks is, to obtain an ESI registration. The gover

All you need to know about PF registration

Today, the Employee Provident Fund has become a very significant part of retirement planning. One of the evident benefits of the EPF is that compound interest on PF is totally tax-exempt. Moreover, there is an assurance of the steady growth of your money upon the maturity period. If the PF account is continued for a very long period, it can significantly assist in meeting the retirement plans. Non

Importance of EPF registration for contractors

It is beyond any doubt, the EPF registration is not only treated as a retirement planning scheme for the employees but it also a very integral part of compliance for certain establishments. The employer PF registration is a mandatory requirement for organizations like a factory or production units where contractual labor is hired. One of the key advantages of the EPF is that compound interest r

Role of PF & ESI registration in getting Roads Construction Contracts

Construction of Roads and civil works are connected to the digging of earth and creating of the path that is fit of the transportation of vehicles. Any road improvement contract starts with the clearing of earth and rocks by tunneling or excavation. The project similarly incorporates the working of blockades, expansions, and tunnels. Real designing, support and masterminding continue fulfilling di

How to get your School Affiliated from CBSE?

In India, education is considered to be of divine importance. There’s no doubt that India is the country where education and civilization have taken their roots and have been spread to the whole world from here. Perhaps that’s the reason schools are viewed as temples of education in India. These days the schools are running in huge profits due to advanced curriculum and syllabi, thanks

How to Obtain ICSE Board Affiliation for a School in India?

In India, schools are treated like shrines of enlightenment. They are generally run as not for profit organizations. However, with the advent of globalization, many international schools have also entered the scene. Despite that, the public schools have not lost their importance due to their student friendly curriculums. Recent statistics have revealed that in Delhi on an average of 14 lakh studen

The Ministry of Corporate Affairs has already made relevant amendments to the general provisions for company incorporation, in order to increase the convenience in business compliance. Recently, MCA has introduced the compact e-Form SPICe+, which will help the new startup entrepreneurs to accomplish necessary several business compliances through a single form. Let us understand in detail about

How to get your School Affiliated from UP Board?

Any school is sad to be renowned only if it is running as an ancillary or has been associated with a well-known board of education, such as the CBSE board, or the Council for the Indian School Certificate Examinations (CICSE) board. In the state of Uttar Pradesh, there is one such board of education called the UP board. There are some stringent rules and regulations that must be followed for getti

The Ministry of Corporate Affairs has introduced noteworthy amendments to the provisions for the companies from time to time. With a view to boost as well as simplify the business compliance among the Indian companies, MCA has brought a new compact e-Form SPICe+. With its effect, all new companies are supposed to obtain Mandatory EPF Registration as well as ESIC Registration. In order to unders

How to start a Private Security Agency in India?

Running a Private security agency is indeed a very lucrative business idea that involves thorough planning and organizing. If you are planning to begin a security agency, you must not overlook the potential risks associated with the workforce i.e. security staff employed. Hence, providing assistance to the workforce is undoubtfully beneficial for your business concern and in turn favorable for the

Recently, the government has introduced several reforms with regard to EPFO and ESI registration of Indian employers. With a view to bringing all the new public, private limited companies, as well as the one-person company under the ambit of EPFO & ESIC, the Ministry of Corporate Affairs has recently introduced a compact e-form SPICe+.  Through the e-form SPICe+, the ESI, as well as th

Today the whole world is badly hit due to the outbreak of Coronavirus disease, also known as COVID-19. The total number of deaths due to COVID-19 around the globe has reached a terrifying stage. Many nations are now witnessing a deadlock due to the intensity of the infection. In the wake of the peril of the pandemic of Coronavirus, the ESIC has now extended the due date for payment of the ESI c

Government to pay EPF Contribution for Next 3 months amid Coronavirus

Everyone knows that the world is facing the threat of Novel Coronavirus disease, also called COVID-19. As the total number of cases of COVID-19 infection in India has reached a terrifying stage, our government has now imposed a lockdown throughout the country to mitigate the threat of the coronavirus infection. Due to this lockdown which is to continue till April 14, the businesses have come to

GET E-STARTUP INDIA IN YOUR
POCKET!