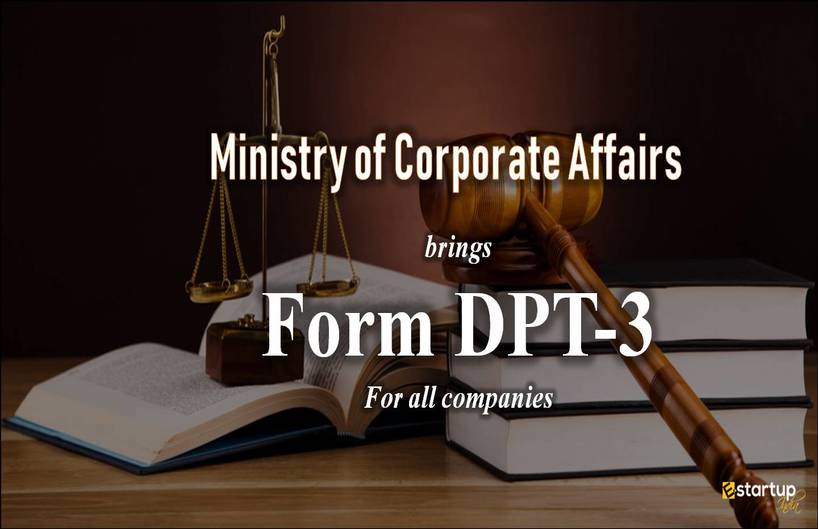 As per the Companies Act 2013, a company form of business is a separate legal entity. All types of companies are supposed to fulfil certain legal compliance on yearly basis. These are collectively called Annual compliance of private limited company or RoC filing.

Basically, DPT-3 is a one time return of outstanding receipts of money or loans taken by a company that it has not considered as deposits.

As per the new MCA guideline, all companies except Government Company shall file a single time return of the outstanding receipt of money, herein referred to as loan by a company but are not treated as deposits.

Recently on 22nd January 2019, the Ministry of Corporate Affairs came up with a new amendment in the Companies (Acceptance of Deposits), Rules, 2014.

A new sub-rule is added, wherein every company (other than government companies) has to file a onetime return of Loans by a Company not treated as deposits, herein referred to as e form DPT-3.

The following questions will serve as important FAQs with respect to form DPT-3 as prescribed by the Companies (Acceptance of Deposits) Amendment Rules, 2019.

#3. Whether Form DPT-3 applicable to all companies?

Through the new Companies (Acceptance of Deposits) Amendment Rules, 2019 MCA has directed that-

#5. Which all companies shall file e-form DPT-3?

All types of Companies, whether Private limited, Public limited and OPCs, except the Government Companies, have to file DPT-3.

Hence, for the year it will be a part of the Annual compliance of private limited company.

#7. What in case of  Secured & Unsecured Loan or Both types?

The Form DPT-3 has to be filed both in case of secured as well as unsecured Loans.

#8. What in case of ECB received by Company?

#9. Which period loans shall be covered under Form DPT-3?

All Outstanding receipt of Money or Loan pertaining to 1st April 2014 to 22nd January 2019 shall be covered under the e-form DPT-3.

#10. What if Company has received a loan from Holding or Subsidiary Company?

As discussed above, the form DPT-3 is supposed to file for all kinds of loan received by Company. Hence, in case a Company has received a loan from a Holding or Subsidiary Company or Associate company, it has to file e-form DPT-3.

The e-form DPT-3 is to be filed for outstanding loans of a company. Hence, if a loan was due before as on 1st April 2014, and is still outstanding in Company’s record, it has to be reported to ROC in e-form DPT-3.

If a Company has already repaid its Loans before or on 22nd January 2019, then such loan is no longer outstanding in Company records. Hence, no need to file e-form DPT-3.

#15. Whether form DPT-3 is to file in case of no outstanding loans?

There is no need to file form DPT-3 if there’s no outstanding Loan or a company doesn’t accept any loan.

To know more, read the .

If you need any help regarding Annual Compliance of Private Limited Company, feel free to contact us at 8881-069-069.

Download E-Startup Mobile App and Never miss any updates relating to your business.

if a pvt. ltd. co incorporated on july2018 is required to file dpt-3

What are the key elements of Annual compliance in case of a Private Limited company?

What are the key requirements for Annual Compliance in case of an LLP?

Regulatory compliances are crucial aspects of governing trade & commerce of a nation. For a uniform and healthy business practice throughout the nation, these compliances are enforced on all the business entities. Although operations in all types of business firms are governed by the similar set of annual compliances, every business form is legally controlled under separate laws.

The government has provided for several regulatory compliances in respect of various business entities for the uniform and legitimate operation. It has clearly specified explicit obligations for annual compliance of private company, that all the companies are required to fulfil consistently every year.   However, some companies fail to comply with the requirements of the Companies Act comp

It is undeniable that to govern the entire realm of corporate affairs of India in a foolproof manner, the Companies Act 2013 needs to be regularly amended and modified. The provisions of the Companies Act are needed to be changed according to the changing status quo. The task of modification and updating the provisions of the annual compliances for all the business entities is done by th

Due date for filing form DIR-3 KYC is further extended

Recently, the Ministry of Corporate Affairs (MCA) had issued a notification that in order to update its database, it will be conducting an annual  ‘Know Your Customer’ or KYC session of the Directors of all the companies across India through a new DIN-KYC form, i.e. DIR-3 KYC, and the due date for submission of the DIR-3 KYC form was 31st August 2018. Given below is the notific

The Ministry of Corporate Affairs (MCA) had introduced a new form, i.e. DIR-3 KYC in for an annual ‘Know Your Customer’ or KYC of the Directors of all the companies. The due date for filing form DIR-3 KYC was extended to September 15, 2018, which has already passed. For the directors who have still not filed their DIN-KYC, there’s a cause of respite. The Ministry has now reduc

Due date for ROC filing for Private Limited Company Extended

According to the Companies Act 2013, all companies are separate legal entities and are directed by certain provisions given of the Act. As per the Company law, all entities are supposed to undergo some legal compliance annually. These are collectively referred to as Annual compliance. The Ministry of Corporate Affairs, in this context, has given a great relief

According to the Companies Act 2013, all companie's are separate legal entities and are directed by certain provisions given of the Act. As per the Company law, all entities are supposed to undergo some legal compliance annually. These are collectively referred to as Annual compliance. The Ministry of Corporate Affairs, in this context, has given a huge relief

What are the Highlights of Companies (Amendment) Act, 2018?

All the public and private companies are governed under the Companies Act 2013. It is beyond any doubt that the government has repeatedly amended the act so as to rule out complexities and provide for necessary changes in the corporate laws. Introduced in 1956, the Companies Act was amended first in 2013 and then in 2017 as the Companies (Amendment) Act-2017. In a bid to resolve many ambi

Which new sections have been introduced in the Companies (Amendment) Act, 2018?

Every company in India is administered as per the provisions of Companies Act 2013.  Evidently, the company form of business is run as a separate legal entity and is governed by certain laws and regulations as given under the Companies Act. In order to eliminate the complexities involved in the government has introduced repeated amendments in the act. The Companies Act-2013 has been a

As per the Companies Act 2013, a company form of business is a separate legal entity. All types of companies are supposed to fulfil certain legal compliance on yearly basis. These are collectively called Annual compliance of private limited company or RoC filing. However, recently the Ministry of Corporate Affairs has introduced a new one-time mandatory compliance for all the companies. MCA has

10 Things you must know about e-Form INC22A (ACTIVE)

As we all know, the Ministry of Corporate Affairs has introduced a new Rule 25A under the Companies (Incorporation) Rules, 2014. Under this, it has introduced a new Form INC-22A (ACTIVE) for all those companies that were incorporated on or before the 31st December 2017. This e-Form has been introduced as a strong measure for enhancing the compliance level of the companies. The due date to fi

Very recently, the Ministry of Corporate Affairs has introduced a new form for company incorporation, i.e. the Form  INC-35, commonly known as e-Form AGILE. From 31st March 2019 onwards, all those companies that are intending to file the application for company formation in SPICe form, need to file this new e-form AGILE along with SPICe. They can opt for GST Registration, ESI Registration

Recently, the Ministry of Corporate Affairs had introduced the e-Form INC-22A (ACTIVE) for the companies that were incorporated on or before the 31st December 2017. The due date to file the e-Form INC22A was 25th April 2019. In case the e-Form INC-22A has not been filed, the company shall be simply marked as “ACTIVE non-compliant”. This will attract a late filing f

The Ministry of Corporate Affairs (MCA) had introduced an annual KYC form, i.e. DIR-3 KYC.  The objective behind this form was annual ‘Know Your Customer’ or KYC of the Directors of all the companies. It was introduced as a one-time KYC form. The ministry, however, made this form mandatory to be filed on 30th April every year. The due date for filing form DI

Very recently, the Ministry of Corporate Affairs (MCA) had notified that a new form i.e. DIR-3 KYC has been introduced, wherein every director holding a Director Identification Number [DIN] has to update his personal details to the RoC on an annual basis. The DIR-3 KYC Form Due date has now approached. It is 30th of September 2019. 1. What is the purpose of a new form i.e. DIR-3 KYC? The

As per section 90 of the Companies Act, 2013, all the companies are required to file a declaration with RoC in respect of its Significant Beneficial owners disclosing their interest in the company by way of shareholding or voting rights, in the Form BEN-2. The due date of filing Form BEN-2 was extended to 30th September 2019. The Ministry Of Corporate Affairs has now further extended the due date

As per the Companies Act 2013, all the companies are considered separate legal entities, which are governed by the provisions given in the Act. The Companies Act 2013 states that all companies are required to fulfill certain legal compliance annually, which are collectively known as Annual compliance of the private limited company or RoC filing.  In this regard, the&nbs

The Ministry of Corporate Affairs routinely brings about various kinds of provisions for enhancing compliance and transparency and boosting the overall ease of doing business among the companies. Recently the MCA was planning to introduce an artificial intelligence mechanism on the MCA 21 portal. The intent was to make compliance procedures such as company formation, or annual compliance simpler,

All Business Compliance Due Dates Extended due to Coronavirus

We all know that today the world is suffering due to the outbreak of Novel Coronavirus aka COVID-19, which has now become a global pandemic. It has caused widespread economic disruption. In India, the government is compelled to impose a curfew in all 30 states till 31st March 2020, which has disrupted the normal course of business. Resultantly, businessmen are not able to fulfill their compliance

Deactivated Directors asked to Become Compliant Once Again amid COVID-19!

We all are facing the biggest adversity, i.e. Novel Coronavirus disease aka COVID-19. The Indian government has imposed a curfew till April 14 across the nation so as to mitigate the risk of the coronavirus infection reaching the third stage. This lockdown has interrupted the normal course of businesses. Businessmen are not able to fulfill legal compliance. Hence, the government has introduced man

GET E-STARTUP INDIA IN YOUR
POCKET!